Skip to content
1 Open CNC system CNC system is the core of CNC technology, the "brain" of CNC machine tools. Open CNC systems have attracted attention since the early 1990s. The initial open system architecture is still geared toward specific devices, hardware and software. For the control of modern CNC machine tools, a completely computer-based, harmonious and standardized software environment is required, so that complex control functions can be realized according to user needs, and processing quality and flexibility can be improved while shortening processing time. ,As shown in Figure 1. 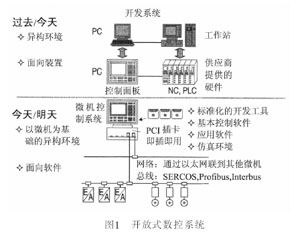 As can be seen from Figure 1, the structure of the open CNC system is software-oriented. The interface and software platform can be defined by the user, and the functions are continuously integrated into the control system to form a networked manufacturing environment. The control system hardware and software are completely separated, and the corresponding hardware or software can be upgraded separately according to the needs and development of the technology. This is very beneficial for machine tool builders and users.
When the user enters the internal interface of the CNC system, the function of the control system can be modified, deleted and added according to the requirements of the machining process to improve the performance of the machine tool (including the control system). Through the external interface, new control functions can be added according to your own special needs and experience. Undoubtedly, the open control system is the development direction of machine tool control technology, which will bring benefits to CNC system suppliers, machine tool manufacturers and end users, as shown in Figure 2. 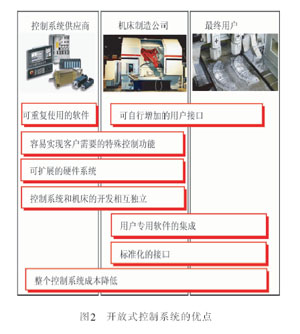 2 Open sign and connotation The degree of openness of the CNC system can be evaluated from the following four aspects.
(1) Portability. The application module of the system can be used on another platform without any changes, and still maintain its original performance.
(2) Scalability. Different application modules can run on the same platform without conflicting with each other.
(3) Synergy. Different application modules can work together and exchange data in a defined manner.
(4) The scale is variable. The functionality and performance of the application modules and the size of the hardware can be adjusted as needed.
Practice has proved that the openness of the control system will involve the human-machine interface, the control core and the entire system:
(l) Open human-machine interface. â€œOpenâ€ is limited to the non-real-time part of the control system and can be modified for user-oriented programs.
(2) The open control core (CNC and programmable control, etc.) is open to a limited extent. Although the topology of the control core is fixed, user-specific filters including real-time functions can be embedded.
(3) Open control system. The topology of the control core depends on the process, and the internals are interchangeable, scalable, portable, and work together.
Currently, although many CNC system suppliers claim that their products are open CNC systems, the openness of the system is still very different. The fully open CNC system should be able to communicate with the upper and lower layers, as shown in Figure 3. 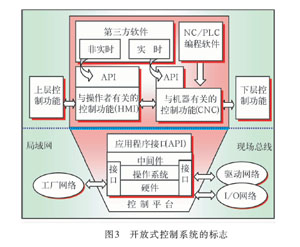 3 Open CNC system structure and its interface control system hardware and software structure have three different options:
(l) Option 1. Based on the traditional CNC system structure, the functions of the system are respectively undertaken by a dedicated processor, and the position controller of the core of the control system uses an analog drive interface.
(2) Option 2. The control module is integrated to reduce the number of processors and a digital drive solution with integrated control functions.
(3) Option 3. Based on a microcomputer, using a real-time operating system and a single processor, all control functions operate as a software task in a real-time environment, that is, SoftCNC, with greater flexibility.
The structure and comparison of the three different schemes are shown in Figure 4. 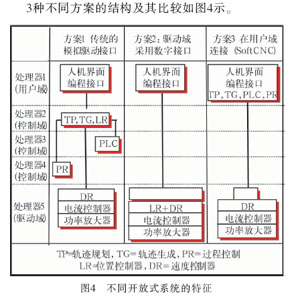 The new generation of CNC machine tools requires high real-time and reliability, and the interface performance of hardware and software is of great significance. The interface can be divided into an external interface and an internal interface, as shown in Figure 5. IMG src="/res/20070315094144259.jpg" border=0>
The function of the external interface is to connect the control system with the upper and lower devices and the user, and can be divided into a programming interface and a communication interface. The NC and PLC programming interfaces are standardized, such as RS274, DIN66025. Fieldbus SERCOS, Profibus or DeviceNet are usually used as interfaces for various devices and I/Os, and Ethernet and TCP/IP are used as interfaces to the upper system. The internal interface of the system environment is used to form the interaction and data exchange between the components of the control system core.
For more than 10 years, countries have conducted fruitful research and development on open control systems. For example, the US Next Generation Controller (NGC) research program proposes the Open Architecture Standard Specification (SOSAS) and the three major automotive companies have proposed the "Open Module Structure Controller (OMAC)" program; Japan has 18 machine tools. The "Open Controller Environment (OSEC)" association, in which manufacturers and system providers participate, is committed to promoting the openness of controllers; the "Automated Open Control System Architecture (OSACA)" program initiated by Germany and participating in Europe. The National Institute of Standards and Technology hosted the research of the Enhanced Machine Controller, using the Linux real-time operating system. The source code is public and can be downloaded from for research and research in China. The promotion of open CNC systems has great reference value.
The open features of the control system can be evaluated and compared from three aspects: system platform, communication method and programming method. See Table 1. 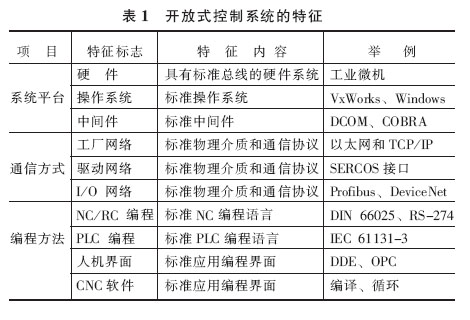 4 application examples of open CNC system
(1) German Andron Company
The Andronic 2060 CNC system is the company's latest product (), which is a new generation of PC-based open systems on the Windows platform. Its internal hardware structure is shown in Figure 6.
It uses two Intel processors to communicate with each other via a PCI-PCI bridge. One processor is responsible for numerical control operations (NC computers) and the other is used as a human interface computer. An NCCPU card and an NC machine card are inserted in the NC computer. The NC machine card is connected to the CNC drive and communicates with the HMI computer via two bus cards with PCI bridges. The internal bus card of the man-machine interface computer is connected to the numerical control system operation panel and the external interface. The CPU card of the HMI computer controls the touch LCD display as well as computer peripherals and network communication, using the FO interface as all peripherals. This system is used in the crankshaft grinding machine produced by Shanghai Machine Tool Group.
(2) Nanjing Sikai Electronic Enterprise Company SKY2006 CNC system is a new generation of open CNC system based on WINDOWS platform of Nanjing Sikai Electronic Enterprise Co., Ltd. (). The hard real-time design of FPGA programmable SoC is greatly improved. The numerical control system interpolation and drive control response determinism can reach nanosecond level. Its internal hardware structure is shown in Figure 7. 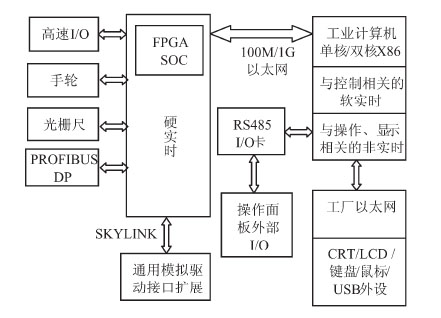 SKY2006 numerical control system uses universal X86 industrial PC for numerical control operation (software real-time module), and is connected with FPGA-based precision interpolation core (hardware real-time module) through l00M/lG Ethernet. The real-time performance of the multi-axis motion of the system is completed by the fine interpolation soft core of the FPGA in parallel, ensuring high precision of the CNC track. The FPGA core module supports PROFIBUS DP (10M) and drive connection, and also has 30M SKYLINK internal protocol and analog drive expansion module to facilitate the system upgrade of existing machine tools.
The operator panel and general I/O are connected to the industrial PC via RS485 via RS485 I/O card. The internal Ethernet of the factory is connected to the second network card of the industrial PC. The human machine interface and the soft real-time module are based on the WINDOWS XP EMBEDDED platform, which can be used for secondary development and function expansion through the corresponding API.
5 SERCOS interface technology SERCOS is an abbreviation of Serial Real-time Communication System. In principle, the numerical control system provides the control of discontinuous motion. Through the interpolation technique, a small straight line segment is used to approach a curve to form the motion track of the tool, as shown in Fig. 8. 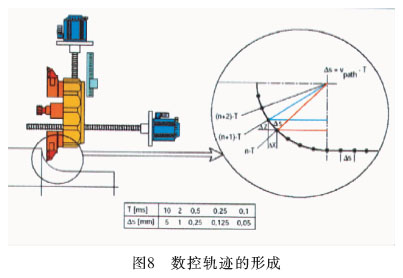 It can be seen from the figure that in order to improve the machining accuracy, the small straight line segment Î”s must be reduced, and at the same time the response time of the system is shortened. For example, when Î”s = 0.05 mm, the response time is less than 0.1 ms.
The traditional numerical control system converts the digital signal of the programming system into a voltage analog signal, and then controls the rotational speed of the servo motor by the magnitude of the voltage, which is still an analog quantity control.
SERCOS technology integrates position control, speed control, precision interpolation and servo motor control in one integrated circuit. The digital servo drive technology connects the numerical control system and the servo controller with optical fiber by means of the "series real-time communication system" interface, which greatly improves the transmission rate and response speed of the system, and can reach nanosecond level. The configuration is shown in Fig. 9. 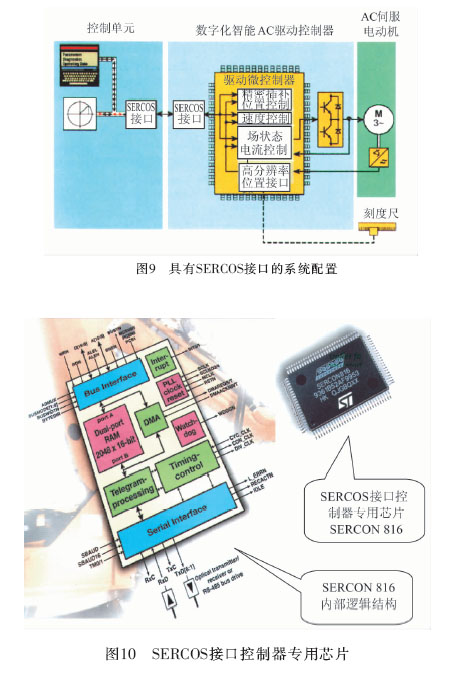 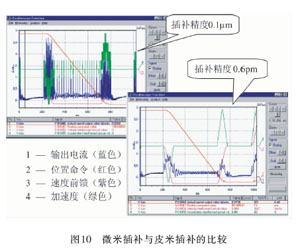 Longneng demolition hammer quality is top in the china.The 608 bearing is C&U.The power is very high.The speed also would be more quickly.

In the future,we will have magnetic motor demolition hammers.Hope more customer will visit our website and inquiry ours products.

We will give you more super happy for your working.